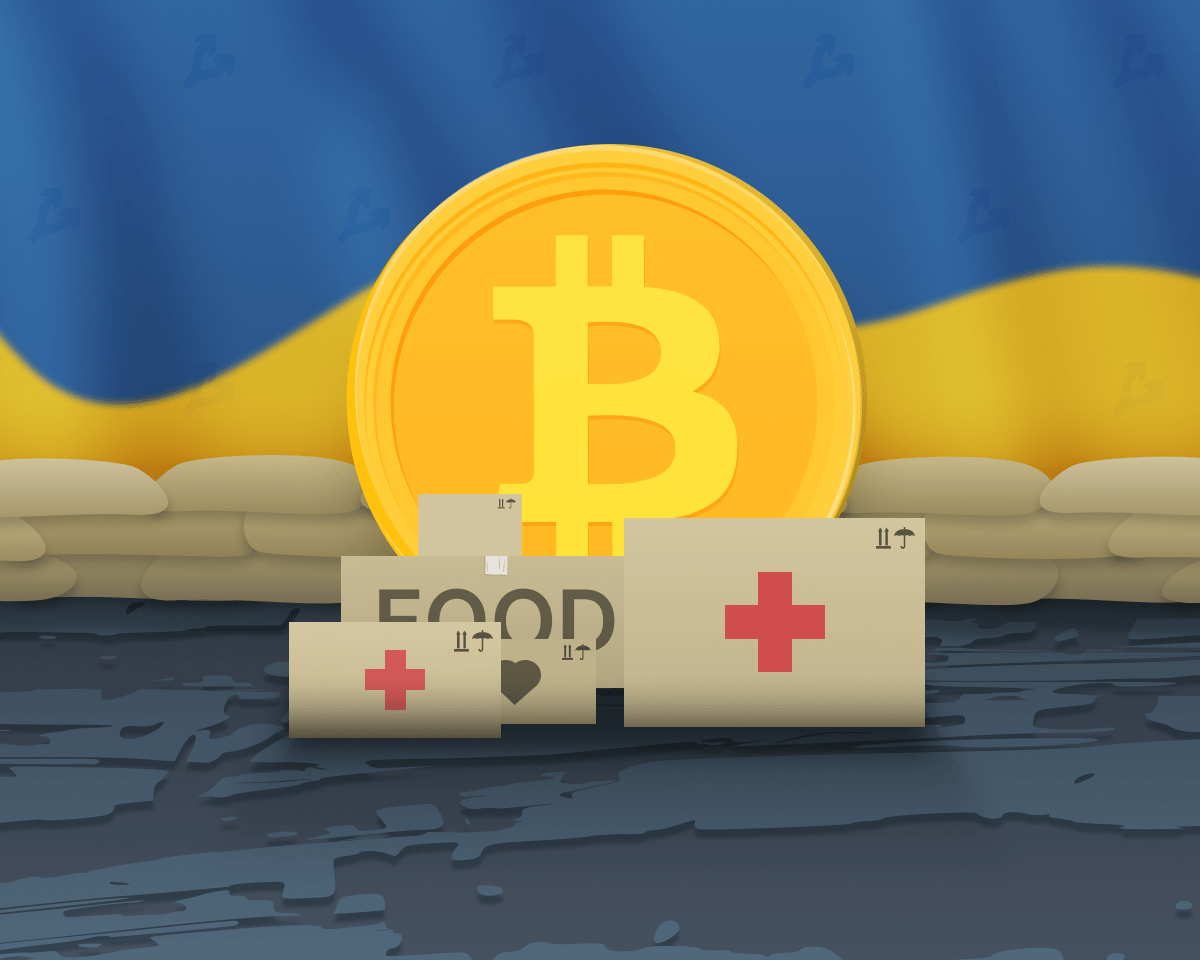 Since the beginning of the Russian invasion, cryptocurrencies have become one of the largest and most effective channels for funding Ukraine’s humanitarian and military needs.

Medicines and clothes, food and water, shelter for refugees and a host of other essentials – buying and delivering all this to Ukrainian cities has become a top priority, the implementation of which is complicated by the almost paralyzed work of the foreign exchange market. Under these conditions, cryptocurrencies have become a lifeline.

See also  The disappearance of Satoshi and the meme cryptocurrency: hit parade of the most popular ForkLog materials for 2021

At the time of writing, Ukraine has received over $96.5 million worth of donations in crypto assets, according to Slowmist analysts.

The government, private companies, charitable and public organizations, celebrities and simply caring people are launching various initiatives to collect donations to help Ukraine through digital assets (see the list of addresses verified by analysts at link).

Cryplogger U.A. figured out exactly how Ukraine raises funds to save the lives of hundreds of thousands of people in the country.

Almost immediately after the start of the war, the official Twitter account of Ukraine published cryptocurrency addresses for donations.

The Ministry of Digital Affairs of the country turned to the Kuna exchange for help in creating cryptocurrency wallets – this is how the initiative of the Crypto Fund of Ukraine arose.

Subsequently, the list of supported assets and partner crypto projects has expanded. FTX and Everstake joined the initiative – this is how the site appeared Aid for Ukraine, where various wallet addresses for Ukraine are collected. Among them are bitcoin, Ethereum, Tether, Dogecoin, Monero and other coins.

“Every few hours, all funds raised are transferred to cold storage. They are protected by multisig and controlled by a trusted group of people,” the Ministry of Digital Development explained to Cryplogger UA.

The received donations are distributed for the needs of the Ukrainian army and humanitarian aid to victims of the war.

As certain requests are received for their payment, crypto assets are either converted into fiat (hryvnia, dollars or euros), or used directly as a means of payment, if the legislation of the providers allows it.

All suppliers that accepted payment in cryptocurrencies were based abroad, the ministry said. Approximately one fifth of the funds collected at the time of Cryplogger UA’s conversation with the Ministry of Digital Development was spent directly in crypto assets.

At the time of writing, more than $60 million in equivalent has already been received on wallets for the Ministry of Digital Development.

Some of them were sent to provide housing, food and medicine, as well as assistance to the occupied cities. Total humanitarian spending at the time of writing is about $6.4 million.

Donation wallets are also created for the Cyber ​​Police and Ministry of Health country.

In addition to the authorities, representatives of the cryptocurrency business are also launching their initiatives.

Cryplogger has already told how the Ukrainian bitcoin community met the war. From the first days, it was actively involved in collecting donations and organizing assistance to both the army and citizens.

In addition to providing infrastructure for the Ukrainian crypto fund, the Kuna exchange has a fund focused on humanitarian things, Mikhail Chobanyan, founder of the platform, told Cryplogger UA:

“This fund is aimed not at the needs of the Ministry of Defense, but at humanitarian local assistance – to the same Mariupol, Chernihiv, Sumy or Teroborona of Kyiv. Our fund is focused on food, medicine, fuel, evacuation assistance.”

The WhitePay platform, whose parent company is the WhiteBit exchange, created a special form for accepting cryptocurrencies in the early days of the war. Now with the help of WhitePay you can donate in three directions – APU and Teroborone, the Ministry of Health and to help the population affected by the hostilities.

Through WhitePay, you can donate in any of the cryptocurrencies supported by the WhiteBit exchange.

“The functionality of crypto exchanges allows you to build complex cryptocurrency and fiat gateways to pay for certain orders. We have such gateways. Merchants and sellers have already begun to adequately treat the crypt and it has become a payment method,” Gleb Udovichenko, head of WhitePay, told Cryplogger UA.

At the time of the conversation with WhitePay representatives, the platform has raised about $2.3 million for humanitarian and military needs. All funds have already been distributed.

In addition, WhiteBIT has integrated with the Ukrainian portal of public services “Diya”.

Foreign exchanges also help Ukraine. Binance has committed $10 million to help resolve the humanitarian crisis, and its Binance Charity has donated $2.5 million in cryptocurrencies to support UNICEF’s work to save the lives of children in Ukraine.

The decentralized exchange Uniswap has introduced an interface for converting ERC-20 tokens into Ethereum and sending funds to the address of a Ukrainian crypto fund.

U.S. bitcoin exchange Kraken has distributed more than $10 million to Ukrainian users as relief amid the Russian invasion.

The cryptocurrency community has become a strong support for Ukrainians affected by the Russian invasion.

From the first days of the war, activists launched a campaign to collect donations Unchain Ukraine. Funds are stored in a multi-signature wallet prior to distribution.

Each person can apply for assistance from the fund individually, organizations and government agencies also apply to Unchain Ukraine.

The downside of the decentralized model is a longer decision-making process, since most applications are considered separately, one of the “signatories”, Andrey Veliky, co-founder of Allbridge, told Cryplogger UA.

Often, “individual” applications within the framework of small payments can be satisfied immediately, while those received from organizations for the distribution of large amounts are studied additionally.

“There are applications where we simply transfer funds to other charitable foundations – then we do not make a decision on each case specifically. Having agreed with the fund, we give the money and they further dispose of it, and then they report to us, ”the Great explained.

At the time of writing, Unchain Ukraine has collected more than $7.2 million in donations, and $2.4 million has been distributed.

“We try not to give everything away at once, because if there are higher priority, urgent tasks, we must have the means to solve them,” Veliky says.

Fund Palianytsia is engaged in helping refugees and war-affected Ukrainians. Among its founders are several representatives of the crypto community.

The peculiarity of the fund is in organizing the logistics of receiving and delivering humanitarian aid.

“We buy less, distribute more. We have two warehouses in Poland, up to 30 trucks of humanitarian aid arrive a day, they are reloaded and distributed throughout Ukraine upon request. Our logistics chain is an artery that feeds the whole country with medicines, food and other necessary things,” said Mikhail Morgulets, co-founders of Palianytsia, CEO of Dehive.Finance, and Anton Koshelev, a bitcoin maximalist.

In addition to delivering humanitarian aid, the foundation provides shelter for refugees, provides them with everything they need, and provides psychological and legal assistance.

The latter is one of the largest funds and accepts donations in various crypto assets. At the time of writing, Turn Back Alive has raised over $19 million in Bitcoin, Ethereum, and TRON, according to Slowmist.

The technology of non-fungible tokens, which has become extremely popular, has also become one of the tools to help Ukraine.

Many NFT initiatives have been launched – from state-owned (NFT-museum of the war of the Russian Federation against Ukraine from the Ministry of Digital Development) to private ones.

In addition, an unknown person donated more than $200,000 worth of NFT from the CryptoPunks collection to the Ukrainian crypto fund, and the Bored Ape Yacht Club NFT project team reported that they had donated over $1 million to Ukraine in Ethereum.

Cryptocurrencies that save lives

Since the beginning of the war, the National Bank of Ukraine has suspended the work of the foreign exchange market. Against this background, cryptocurrencies have become one of the main tools for buying various goods abroad and supporting the inhabitants of the country affected by the war.

Mikhail Morgulets and Anton Koshelev from Palianytsia spoke about one of the cases of using cryptocurrencies to pay for things that literally help save lives:

“We bought 23 ambulances and 3 medical jeeps, which are now on their way to Ukraine. We found a British partner who accepted the cryptocurrency, bought and sent the machines to us on his own behalf.”

Cryptocurrencies are used “where it is critical and burning, and also impossible to solve with the help of fiat,” Mikhail Chobanyan noted:

“A good example is Mariupol. We understand that fiat is useless there now. We help with cryptoassets in a targeted way, because there are a lot of crypto assets left there. They find an opportunity to convert, although already most people prefer USDT to hryvnia or dollar in cash.”

The current situation contributes to the mass adoption of cryptocurrencies not only in Ukraine, but throughout the world, as now they have turned out to be one of the few ways to help the country, being in many ways more effective than the traditional financial system.

The DeFi boom that began amid the coronavirus crisis has reached its climax at the end of 2021. Thereafter TVL...